Here we are in October. Now, most people see this as the time just before Halloween where Walmart starts putting out Christmas decorations. But, for those that work at Mass General, it’s also the month where we would usually gather under the tent of the Bulfinch building and feast on the finest cheese, crackers, fruit, and cookies Food Services can find while listening to the greatest hits throughout the decades. Why, you ask? Excellent question. Because it’s Ether Day! One of the most important firsts in MGH and surgical history which is still celebrated to this day. But what is Ether Day, and could it be slightly inaccurate? Hang on to your cheese and let’s go back in time about 200 years to find out.

Let’s briefly touch on the MGH origin story. The year is 1810. Up to this point, there were, surprisingly, only 2 general hospitals in the US, one in Pennsylvania, founded in 1751, and one in New York, founded in 1771. Now, there were medical centers around, but no one providing 24-hour care, in house, for patients. This wasn’t really anything unusual for the time. Doctors still made house calls; family members would tend to their infirm at home. During times of war, makeshift “medical centers” i.e., tents, were formed to take care of the injured and sick. But few free standing, “brick and mortar” type buildings to take care of the sick and provide round the clock care.

Only two places that really came close were a marine hospital in Charlestown that took care of sick sailors and the Boston Dispensary which treated paupers in their homes with the help of public donations. Of course, there was the Boston Almshouse, which was essentially a place where the homeless, poor, sick, drunk, or mentally ill went that wasn’t a jail. Basically, this was the precursor to asylums (because that’s where we put all of society’s “undesirables” until the mid to late 1900’s). Assigned to the Almshouse was a minister named John Bartlett. A graduate of Harvard and a man with an interest in medicine, he wanted a better place for the sick to have access to 24/7 care while giving medical students real life experiences. From 1811-1821, he teamed up with Doctors James Jackson and John Collins Warren, architect Charles Bulfinch, and other doctors and investors to create the concept (and funds) to build the Massachusetts General Hospital along the Charles River in Boston’s West End. MGH opened its doors to patients on September 3, 1821.

Located on the top floor of the facility was an operating theater. The location was carefully chosen, as the top floor allowed for plenty of natural light so the surgeons could see, but there was another reason. It was also far enough away from the inpatient areas so that the screams of patients during the operations wouldn’t be heard since shots of whiskey and biting leather straps can only go so far to help with pain. While the use of gases to anesthetize a patient was first discussed in 1798 by a British chemist by the name of Sir Humphrey Davy, it really didn’t gain any notoriety as anesthesia until 1844, thanks to a dentist with an idea.

Enter Horace Wells of Hartford, CT. An accomplished dentist, Wells was determined to make dental operations painless with the use of nitrous oxide, otherwise known as laughing gas. After seeing it’s success of reducing pain at a laughing gas party (yes, I assure you that was a thing back in the day and maybe we’ll cover that later in another blog), Dr. Wells, DDS, decided to try and utilize this in his practice and had success. So much success, in fact, he was invited to demonstrate the technique at the prestigious Massachusetts General Hospital in January 1845.

How did the demonstration go? Well, I’ll tell you. It went… horribly.

While everything happened as planned, the patient “groaned”, and, because of that one thing, it was determined that this wasn’t a suitable method for anesthesia. Because of this, poor Horace was discredited; his career destroyed. He tried to experiment with other forms of anesthesia using himself as the guinea pig. This only lead to major mental health issues and personality changes. Sadly, almost 3 years to the day of his “failed” procedure, Horace Wells would commit suicide in a jail cell. Ironically, this was the same day his discovery was validated and lauded by the Paris Medical Society.

One other person that was at Wells’ “botched” demonstration at MGH was his partner, Dr. William Morton. Morton, a native of Massachusetts, was determined to not make the same error as Dr. Wells. Shortly after the failed attempt, Morton learned from Wells the potential for ether as a local anesthetic. Thinking there was more to this, Morton consulted a former teacher: Charles Jackson, a doctor and chemist, to discuss the potential for inhaling ether to provide anesthesia. On September 30, 1846, they decided to test this by removing a tooth using inhaled ether as an anesthetic.

It was successful. A couple weeks later, he would once again be in the surgical suite at MGH, only this time, it was his career on the line.

Friday, October 16, 1846 I imagine was a crisp, quintessential New England autumn day. The leaves, all different colors, reflecting off the Charles River. A slight chill in the air. No Red Line delays. Simply beautiful.

Dozens of doctors and medical students enter the surgical suite. A house painter by the name of Edward Abbott is brought in. He has a tumor in his neck that needs to be removed surgically. The doctor selected for this procedure is none other than our MGH founding friend, Dr. John Warren. For the first time, there was an assigned anesthetist- Dr. William Morton. Morton took a sponge and soaked it in sulfuric ether and had Mr. Abbott breathe the fumes before and during the procedure. Dr. Warren successfully removed the tumor in its entirety from a 3-inch incision in the neck while Mr. Abbott was peacefully asleep, aside from some occasional muttering. After the surgery, Dr. Warren looked at his colleagues, the medical students, and said “Gentlemen, this is no humbug”.

Unfortunately, though, there would be some humbug later. Not surrounding the efficacy of ether as an anesthetic, but rather the credit. Morton decided he was going to try to obtain exclusive rights to the use of ether. This didn’t sit well with Jackson, and he accused Morton of being a swindler who forged documents. The lawsuits would go on for years. Interestingly enough, this wasn’t the first time Jackson tried something like this. In 1832, he met Samuel Morse, later trying to claim that he had the idea for the telegraph first and Morse stole it (spoiler alert- while there is some speculation of the concept of the telegraph, Jackson was not involved). Jackson would eventually have a mental health episode and ended up in an asylum in 1873, dying there in 1880. But this isn’t the only issue with rightful credit. For the rest of this, we need to travel down to Georgia, where the first use of ether in a surgical setting actually occurred.

The credit for “first” use of ether as a surgical anesthetic truly belongs to Dr. Crawford Williamson Long of Jefferson County, GA. Dr. Long had noticed people becoming ill or injured at ether parties and feeling no pain. In 1842, Long performed surgery on the neck of a patient while using ether as anesthesia, and successfully removed a tumor. He would continue to use ether in his practice, but he would not publish his findings until 1849. By then, history was already written, and MGH would be labeled as the “first” in anesthesia.

Surgeries are no longer performed at the Ether Dome, but it’s still there. Almost everything in there is just as it was 200 plus years ago, with some small improvements made to be up to modern building codes. Before COVID, tours and lectures were held there.  To go inside of it is truly humbling and, dare I say, “is no humbug”.

Want to talk about it? Come find the discussion in the SMYS Lounge in Nurses Lounge!

The black and white picture that was taken on October 16, 1846. Dr. William Morton administers ether anesthesia while Dr. John Warren operates on the neck of Edward Abbott, painlessly removing a tumor. 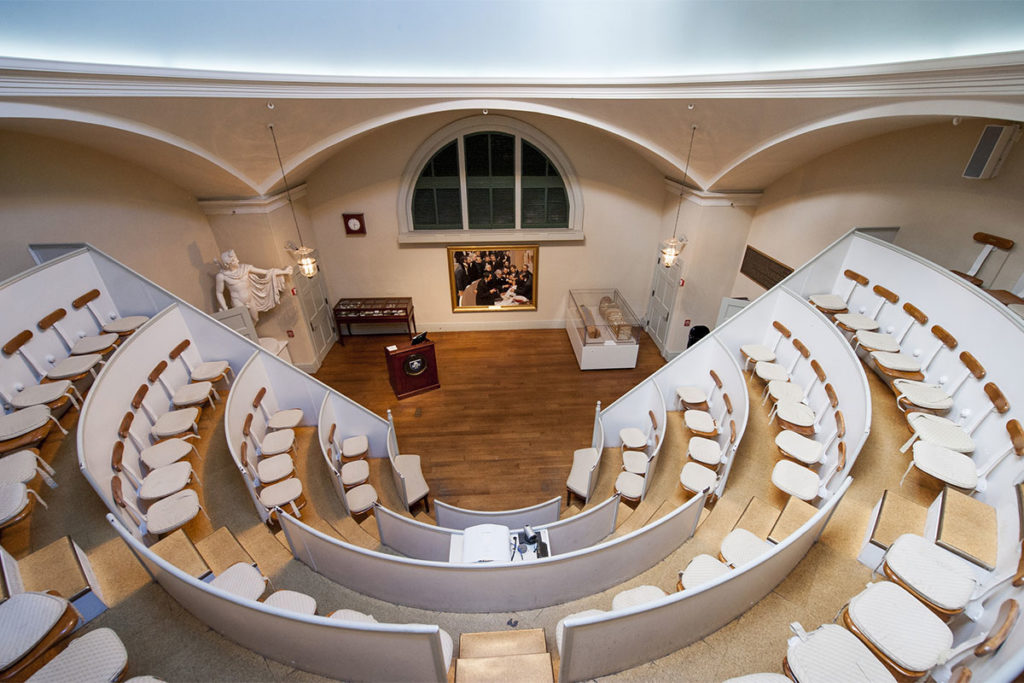 The Ether Dome today. Except for a few modern alterations to make the room compliant with today’s building standards, the room remains as it did 200 years ago. No longer used for surgeries, it is used for lectures and tours.